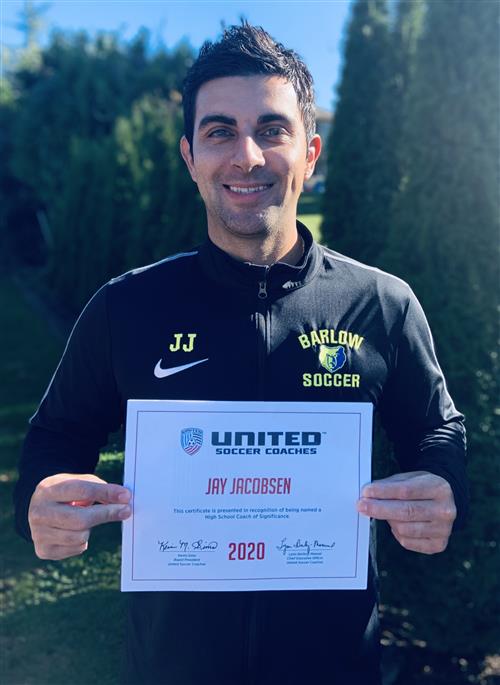 The award is intended to recognize members who are coaching for character and using the soccer field to teach life lessons at the high school level. It is an opportunity for each state, in conjunction with United Soccer Coaches, to recognize excellence and to share stories of how coaches are making an impact within their schools and communities well beyond their records of wins and losses.

In a nomination letter submitted to the association, Jay was described as a coach who cares deeply for his student athletes, their academic successes, and their lives after high school. Jacobsen was also commended for his dedication to the sport of soccer.  He is regularly in contact with other exceptional coaches to learn more about the game and to help his players find the best spots for them to play in college.

Jacobsen has twice been named the Mt. Hood Conference coach of the year. The SBHS Girls Varsity Soccer Team made it to the quarterfinals the last two years.

He has coached the SBHS Girls Varsity Soccer Team for three years and has more than 15 years of experience coaching high school and youth soccer.

Founded in 1941 and based in Kansas City, Mo., The United Soccer Coaches Association has grown into the world’s largest soccer coaches’ organization that serves members at every level of the game.

United Soccer Coaches works every day to inspire coaches and ignite their passion for the game so they pass it on to players and others in the soccer community.